After posting my recent photo on Instagram @pilotmaria I received a lot of comments and DMs, especially after sharing my story with the naked dude…..yes naked man. So I thought of sharing this story, as even after Justin Bieber skated on top of the airplane in one of his music videos, putting it on the map for every teenage girl out there, I am surprised that there were still so many of you that had no idea that this existed, and for me, it was one of the highlights in Iceland so I wouldn’t want you to plan a trip there and miss it. To start with, here are the exact coordinates to get there: 63.4591° N, 19.3647° W but keep reading for some tips and tricks to get the best experience and photos out of it.

History, it was on a cold Wednesday afternoon, November 21st, 1973, at around 14:00 that a US Navy DC 3, (called something else in military terms that I don´t know, but I´m sure that someone will comment it so check out the comments if interested). Declared an emergency and crashed on the black sand beach at Solheimasandur on the south coast of Iceland. Some say that the pilots accidentally selected the wrong fuel tank and let the airplane engines starve, leading to the accident, some say it was because of ice. I won´t dig too deep into that, let´s leave it at that no one was injured and everyone walked safely away from the impact, they say that every landing you can walk away from, is a good landing. 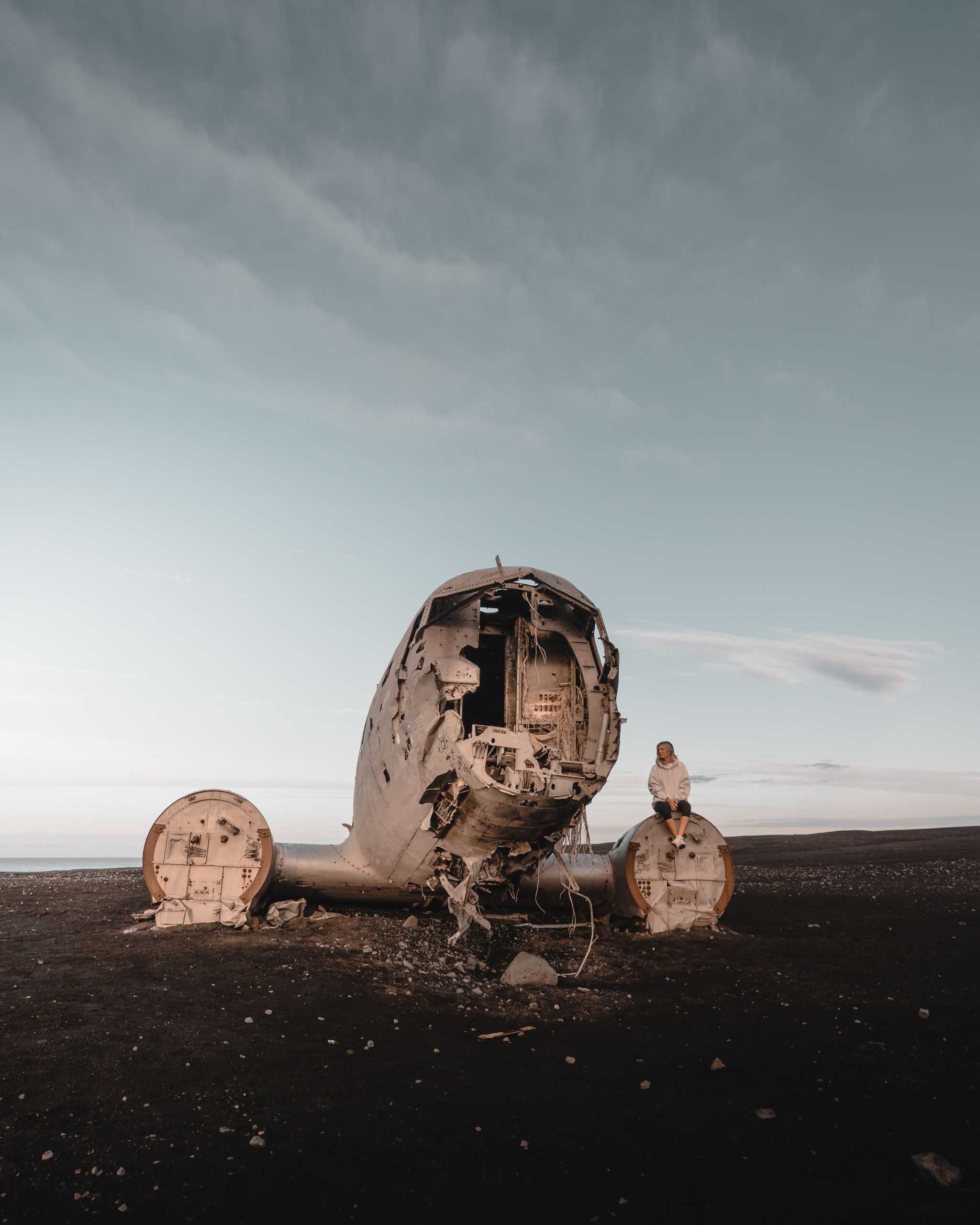 Jon and I set our alarms at 04:00 am something, we stayed at UMI Hotel a fifteen minutes drive from the airplane wreck site, not the actual airplane, that’s an additional hour walk! The parking lot has space for approximately 20 cars, we got there, before sunrise, before breakfast and before everyone else. If I would have known that it was an hour walk from the parking lot, to the actual site I would have brought a banana or something to snack on, I was starving! So if I can give you an advice, bring snacks. If you go in the winter, bring plenty of clothes, it gets freezing cold and located on the coast, in addition to the already freezing temperatures the wind will make it unbearable if not dressed properly. We were there in August, that is summer in Iceland, I was wearing yoga pants, a hoodie, and a jacket…..it was freezing!

As we got to the wreck there was one other couple there taking photos, obviously, they had the same thought in mind as us, get the best possible photos, with the sunrise and without other people in it. So they politely said ´lets take turns´it sounded like a great idea, so that is what we did until ´the naked dude´ turned up. I get it, we all want the best possible photos with the perfect light. But as it was only the six of us there, I think it´s only fair to take turns, the naked guy did not agree. With language communication issues he is in every single photo that I have from this site! Jon and I just had to work around it, taking photos on the other side of the airplane, that worked until he got on top of it, luckily by then we already had a bunch of photos that we were happy with. I don´t mean to be rude, I’m sure his photos turned out just amazing, but I do feel, especially when it is a very photogenic spot and everyone goes there pretty much for the same reason, to take photos, sharing is caring….some of us just a little bit less caring. Anyways, it made for a great story and some additional ´photobombing´ photos. I have by purpose cut his face out in this photo and put Jon there instead, did that just to not upset anyone, the Internet is a wide world and I have no idéa if he actually had a reason to act as he did and I´m not the one to throw anyone under the bus (still left his body there, he obviously put a lot of effort into sculpturing that). 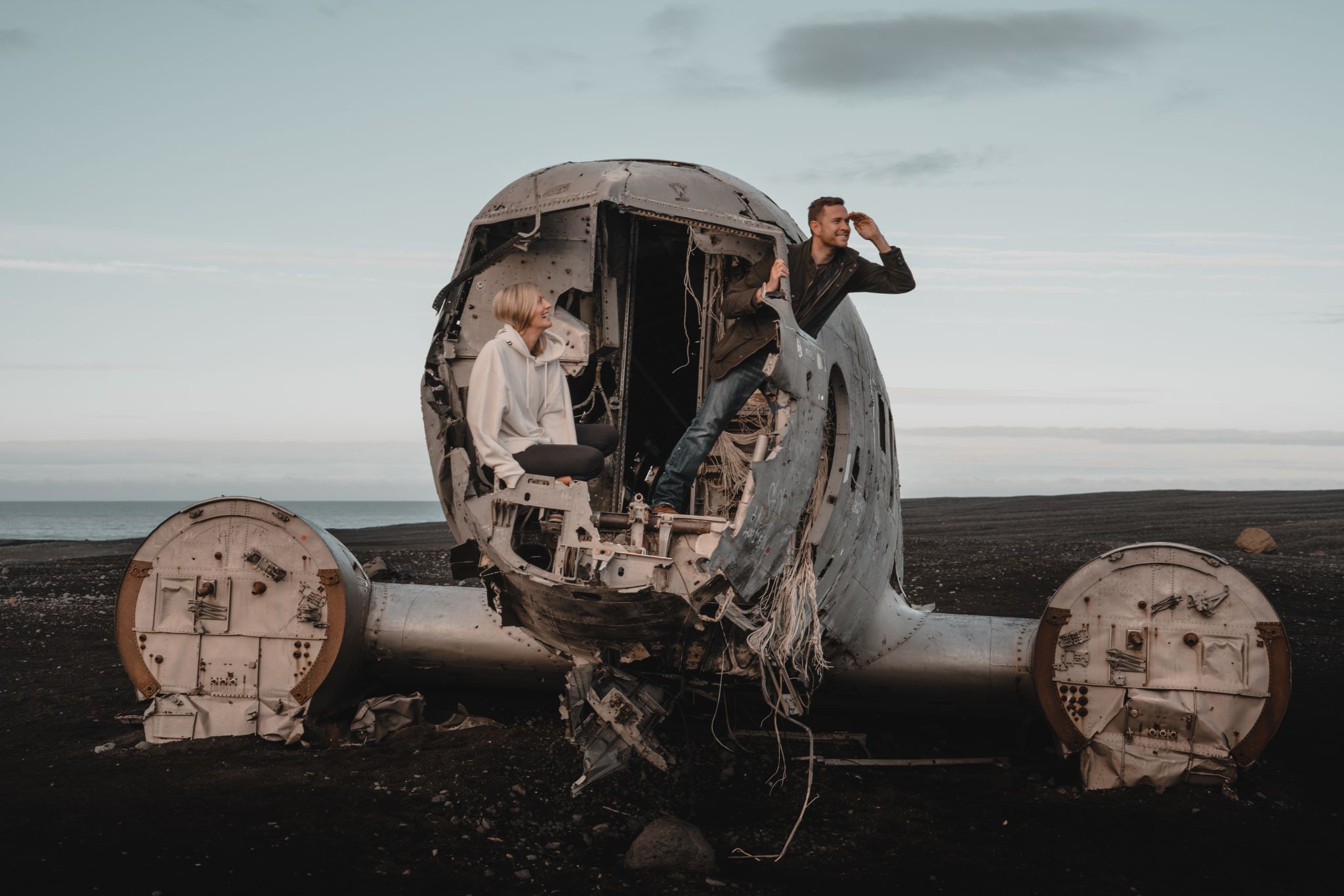 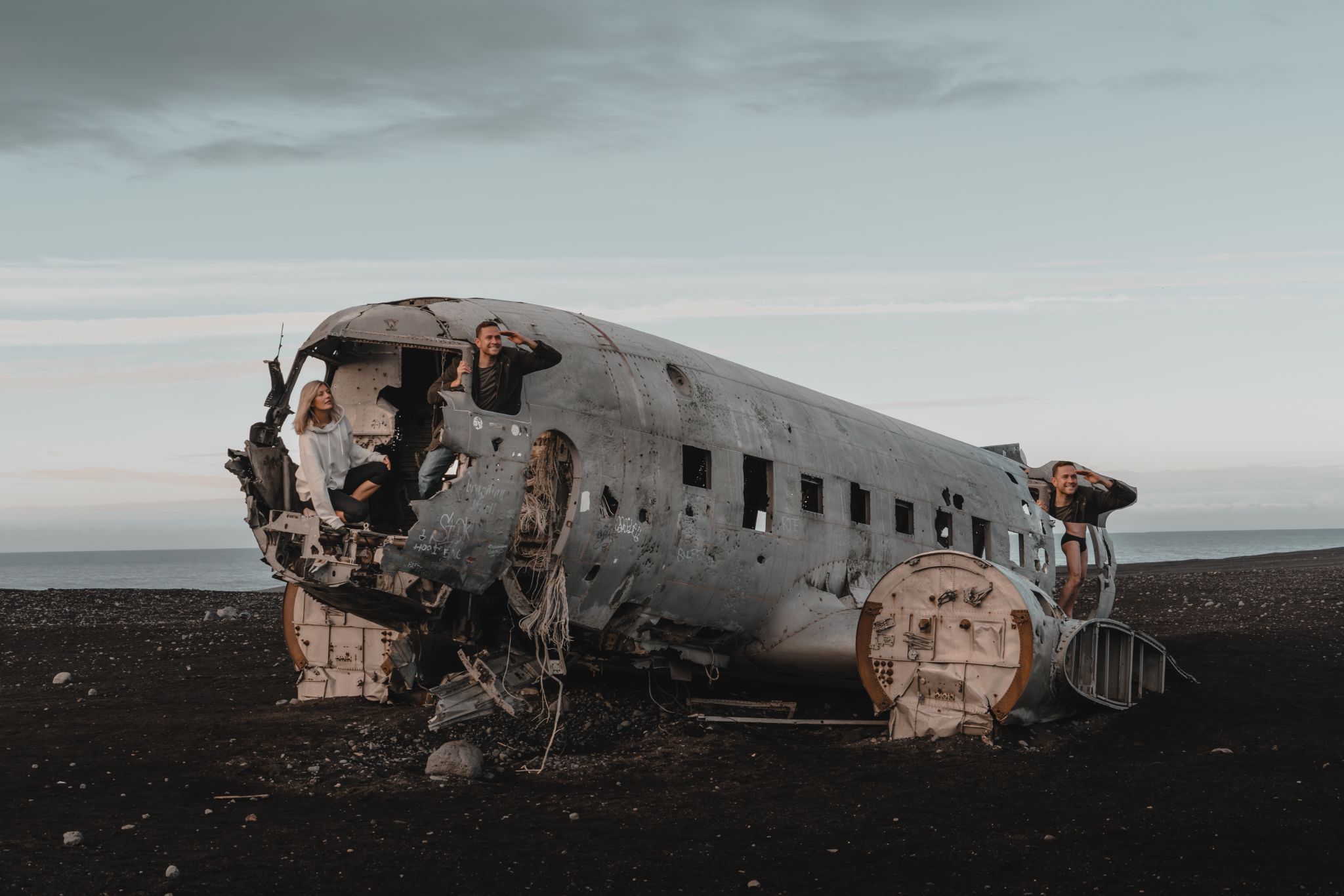 Thank you for reading!

Apologize for any typos, misspellings or grammar mistakes, English is not my first language.

All photos edited using my own presets from the ´Moody Iceland´collection, find them here: sellfy.com/pilotmaria