I asked you all on my Instagram @pilotmaria if you would be interested in me writing flight, airline reviews when traveling and most you said ´Yes, we need this´ and some of you said no because you thought it would be biased for the airline that I fly for, that will not be the case, the airline that I fly for don´t fly long haul, problem solved. This post is not sponsored by KLM but I will leave a link to their website.

KLM Royal Dutch Airlines, www.klm.com 14:10 departure from Gothenburg Sweden to New York, via Amsterdam. We took off a few minutes ahead of schedule, starting off great, with KLM ´Cityhopper´ Embraer 190, well done. Coffee and sandwiches were served free of charge, a lot of airliners have stopped doing this on short/medium haul flights, some have even stopped serving food on long haul flight! So I appreciate when they do, even if I rarely eat the snacks that they have, I don´t eat meat, fish or any dairy products and I try to stay away from bread, but I still appreciate that they have it and I do like my cup of coffee.

KLM 747-400  from Amsterdam Schiphol to New York JFK. Economy seat. It took less than 15 minutes for the flight attendants after take off to come and say hi and hand out headphones for the onboard entertainment, thumbs up!  They also gave us a refreshment towel even in economy class, and a bottle of water, which I politely return as I’m on a ‘no plastic water bottle use’ I had my Tap #DrinkDifferent water bottle refilled from the terminal with me. I like the quick first service hoping that would mean that they will bring our dinners out sooner, food, my favorite time O´flight.

The headphones that they gave us came with an adapter so if you have your own headphones you can simply plug them in using the adapter. My everyday headphones are Bluetooth controlled and were not possible to connect so I used KLM´s, they kept breaking, it´s not like First Class Bose headphones and in the end I had to sit and hold pressure on the  adapter plug for them to work, I am sure that they would  have given me a new pair if I would have asked for it, I was just too lazy and I didn´t want to wake up the girl in the seat next to me.

There were no charging facilities for my laptop and no USB charging port for my phone that was running low on power and I needed the last battery to call Maria when I landed, she landed an hour before me from Madrid and we said that we share an Uber to the city where Malin would be waiting for us. No battery on my phone meant no music, no Netflix no podcasts and I had to rely on the half working headphones onboard, I still managed to get a couple of hours of sleep and landed not too tired in New York.

It took another 20 minutes, making it 35 minutes after takeoff for our dinners to be served. Yas! 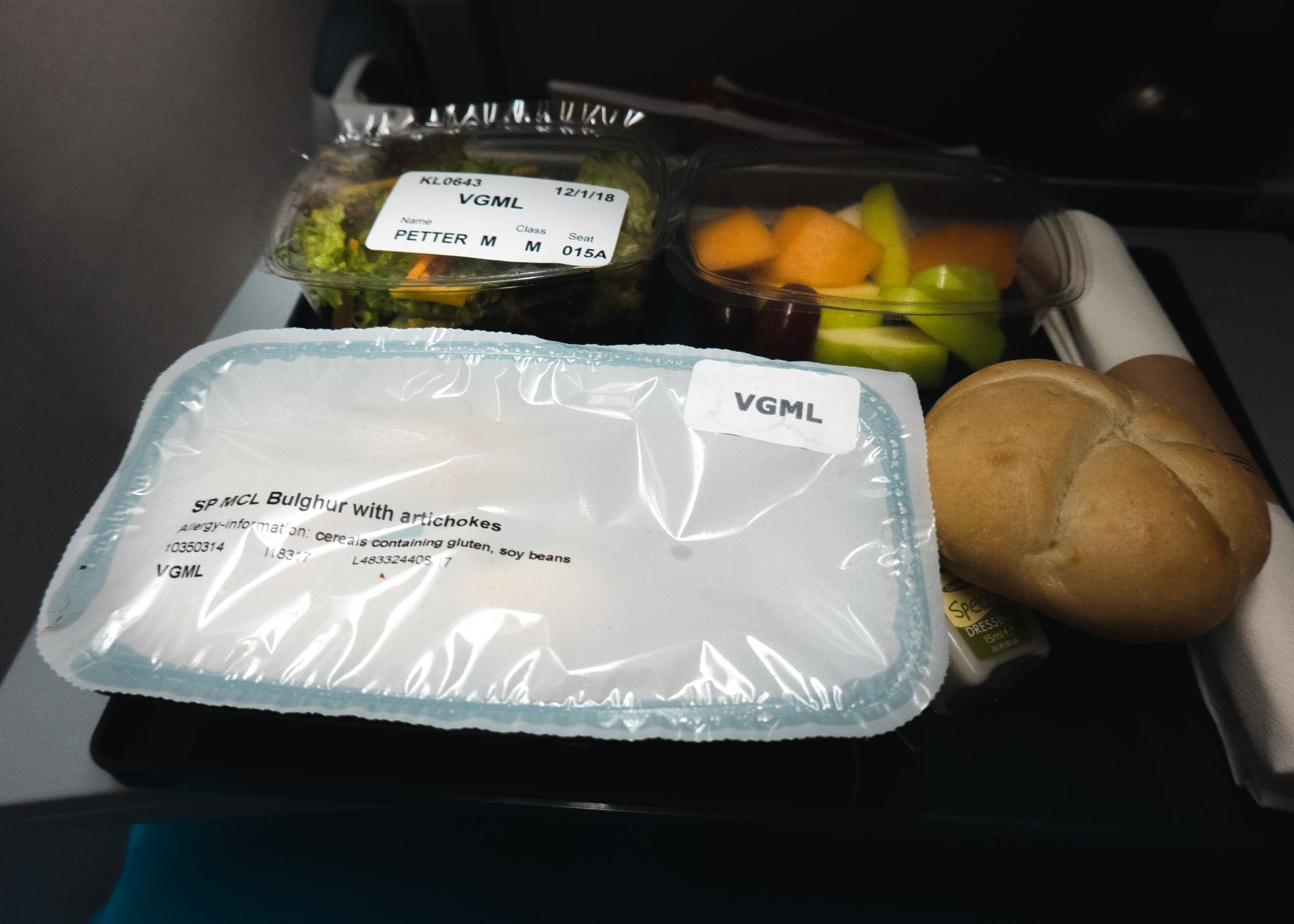 At check-in, I paid an extra Euros 25 (258 Sek approximately 25 Euros) to get a window seat, there were only window seats left available in ´Economy Comfort´I didn’t even know there was such a thing as Economy Comfort but it was quiet and I got my windows seat instead of a middle seat next to the lavatories, 25 Euros well spent if you ask me.

Not sure if I should do a rating on these reviews or not, or just have some categories I rate? What do you prefer? We could do something like this:

Comfort 6/10: Where I sat there was a two/two seat configuration with a wall dividing the airplane making it two ´Economy Comfort´sections. It was roughly 20 seats in this section, quiet and somewhat ´cozy claustrophobic´ no screaming children and even more importantly, no tablets or smartphones with the sounds on, there is nothing that annoys me as much as hearing Candy Crush played three rows back. What takes it down to a 5 is only because they didn´t have anywhere to charge electronic devices.

Food 9/10: Served within an hour after departure, I ordered a vegan meal and was given bulghur with artichokes a side salad and fruit mix as dessert. Coffee was served with Baileys, whiskey or cognac after dinner. My food was delicious, no complaints at all (okay, one, it would be full pot if it was a non-dairy chocolate mousse as a dessert or something more sugary than fruits, oops) probably one of the best airline special diet meals that I have ever had, I would have given them a 10 if dessert was dairy-free chocolate mousse. Scroll down to see my breakfast hot sandwich, delicious!

Friendliness 10/10: The staff could not have been any friendlier, they were always smiling and had a positive attitude. It was my first time flying with KLM and judging from the staff onboard it seems to be a great place to work, everyone gave the impression that they were very happy to be there.

Maria – forgive me for any typos, grammar or wrong spellings, English is my second language and written ´bloggerstyle´ on the go.

Here´s my delicious breakfast hot sandwich that I was given when everyone else had a not at all as exciting pizza slice, loved this one! Could probably eat three of them yum! 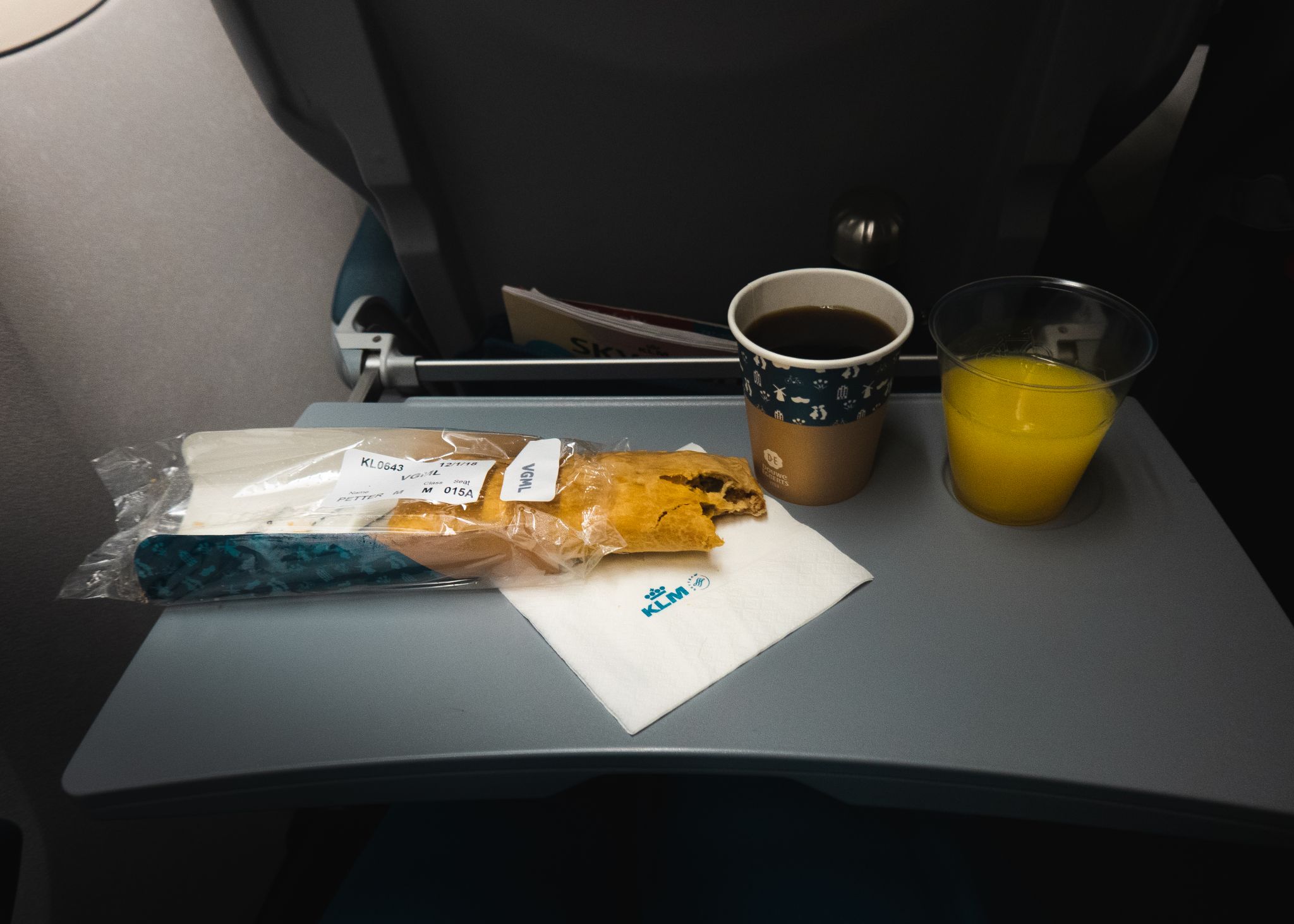