Hi, I am sorry I haven’t posted this blog post any sooner, I actually had it all ready to post but then Iceland happened and I had such an amazing time I focused one hundred percent on just being there and left all my ´musts´ behind. In this weeks ´A Pilot´s Diary´ I will focus on ‘fear of flying’ as always, I asked you what you wanted me to focus on and many of you mentioned  ´fear of flying´ (in ´a Pilots Diary – Chapter III we talked about ´motivation´ read that one here: link ) 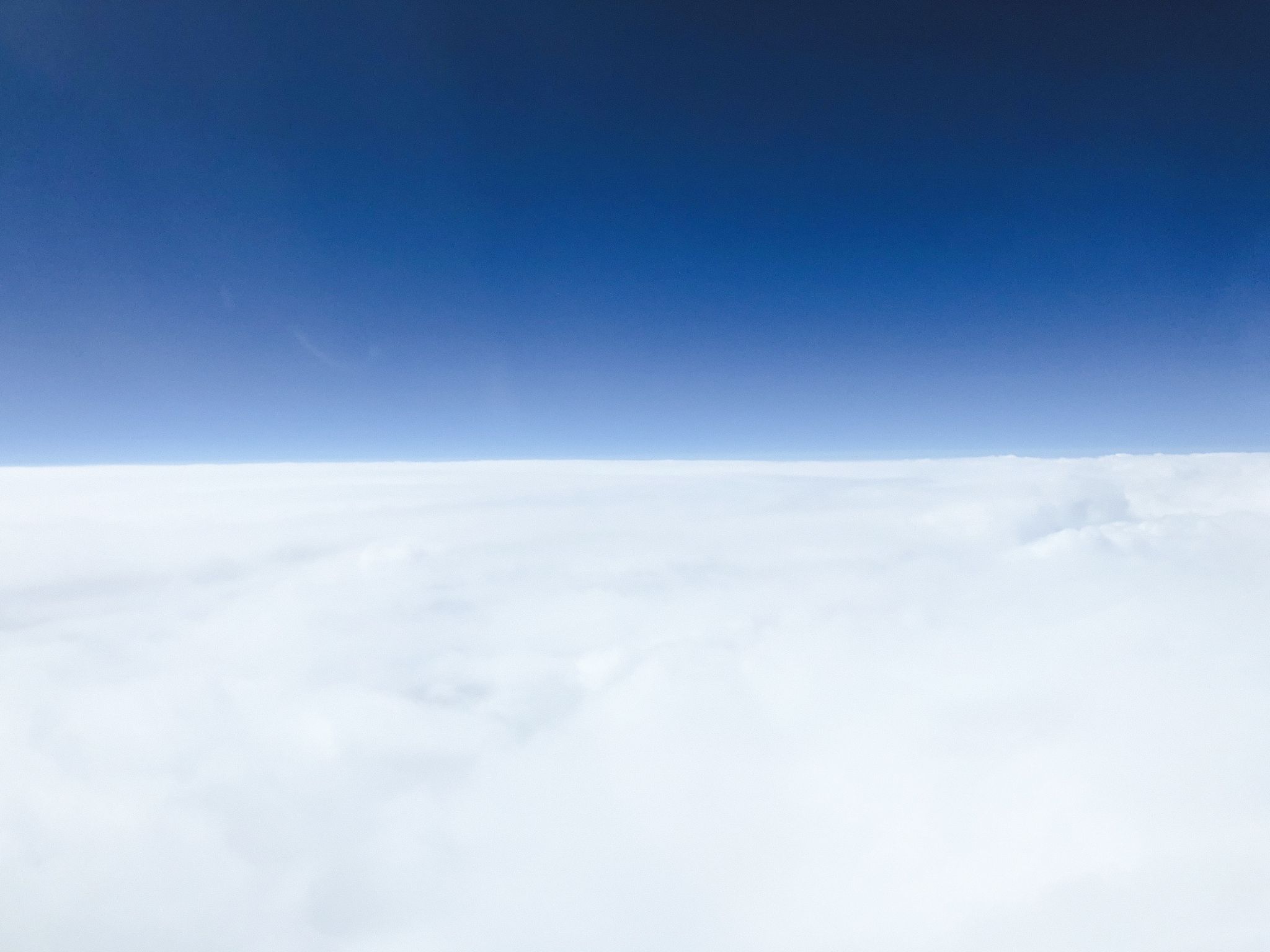 Day 1: Today was the kind of day when I had to remind myself how much I really wanted this, remind me of the days when flying was just a dream, and I would have done anything to be where I am today. We had delays on every sector, landed back in London Stansted almost three hours late. I had plans to meet a friend after work for dinner that we now had to cancel, didn´t help to keep my motivation up. There’s not much we can do about delays, especially not during the summer when the airspace in Europe is busy and if we get delayed on our first sector it will only escalate and get worst by the fourth leg.

Day 2: Unlike yesterday’s delays, we landed early after a four sector day, Knock in Ireland and Budapest in Hungary. Budapest had over 30 degrees and blazing sunshine, summer days like this may occasionally give rise to thermal turbulence which, as passengers may be experienced as ´pretty bumpy´and uncomfortable, and since this weeks topic is ´fear of flying´I thought I explain in short what ´thermal turbulence´is: During hot summer days, when the surface of the earth gets heated it gives raise of lifting air that causes ´small little bumps´ in the air, nothing dangerous but can be experienced as uncomfortable, but just like driving on a bumpy road, nothing worse than that, your car might get tossed around a bit but it will never break and it will never be dangerous, exactly the same with airplanes, it is not dangerous.

Day 3: They changed my so suppose to be four sector day to a two-sector day with a later check-in time, Pardubice in the Czech Republic and back. It´s nice to do a two-sector day for a change, and I landed back in London feeling rested enough to actually do something this day, so went out for a run to clear my head, running for me is like therapy, I haven’t had much time for it lately but I’m hoping to get back into it soon, I used to run 10km runs and I am hoping to be able to run a half marathon by next year, running tips very welcome if you have any.

During our return flight from Pardubice, we asked to fly right of our track by 20 degrees to avoid some Cumulunimbus buildups ahead, they reached Flight Level 380. As a passenger sometimes it might feel like you´re flying ´in the weather´ I often hear stories saying ´we flew right into a thunderstorm´ which is normally (read never) the case, no pilot that I know would fly through a thunderstorm and we have procedures to take extra fuel with us for weather avoidance, ´bad weather´ show clearly on our weather radar as red or solid magenta so we can easily see it during nighttime as well as during the day. We avoided the cloud tops with 20 nautical miles approximately, but could still feel some light bumps and had to put down our coffee cups to not spill all over our white pilot shirts and ask the Cabin Crew to stow any trolleys from the cabin. 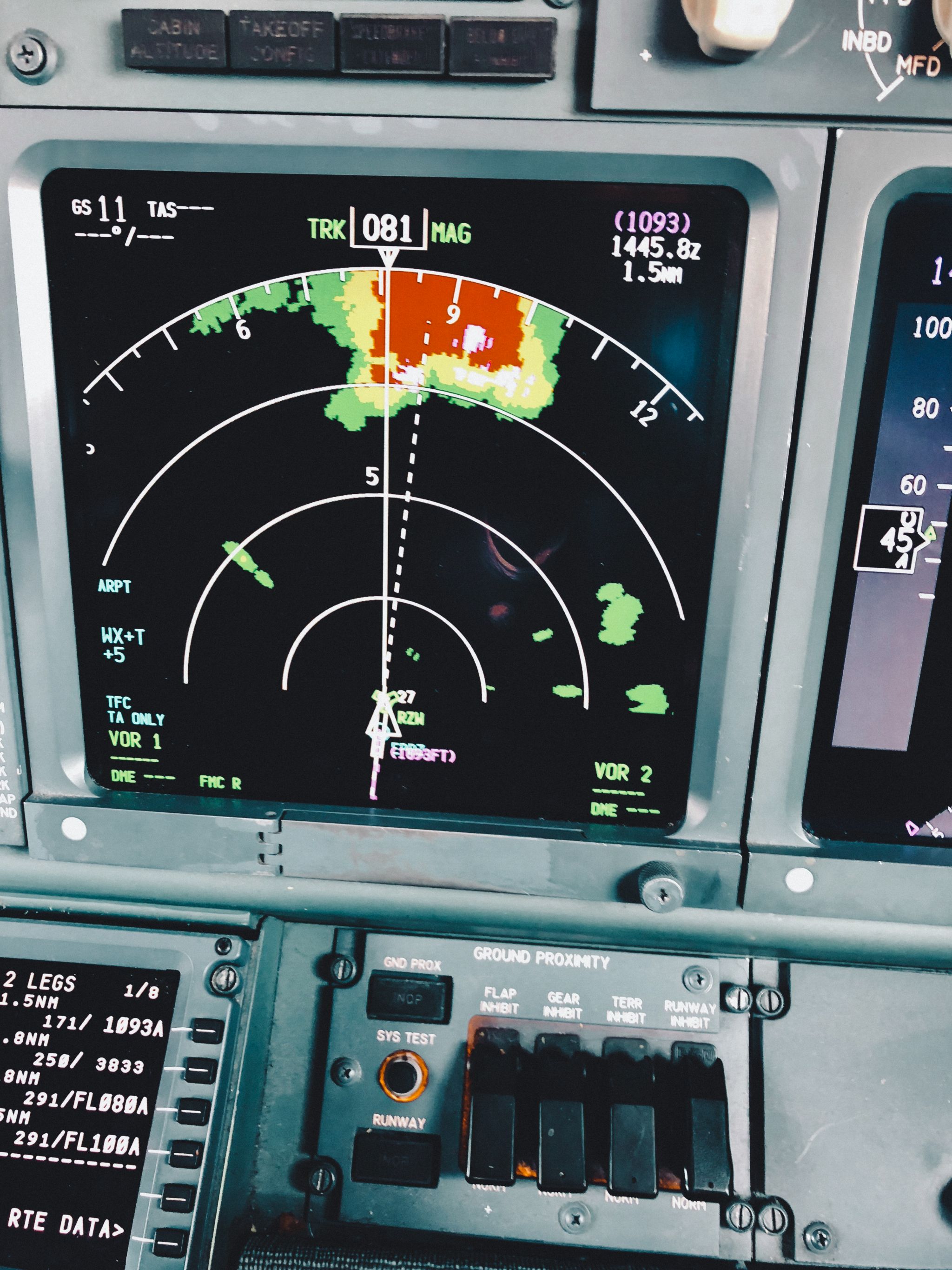 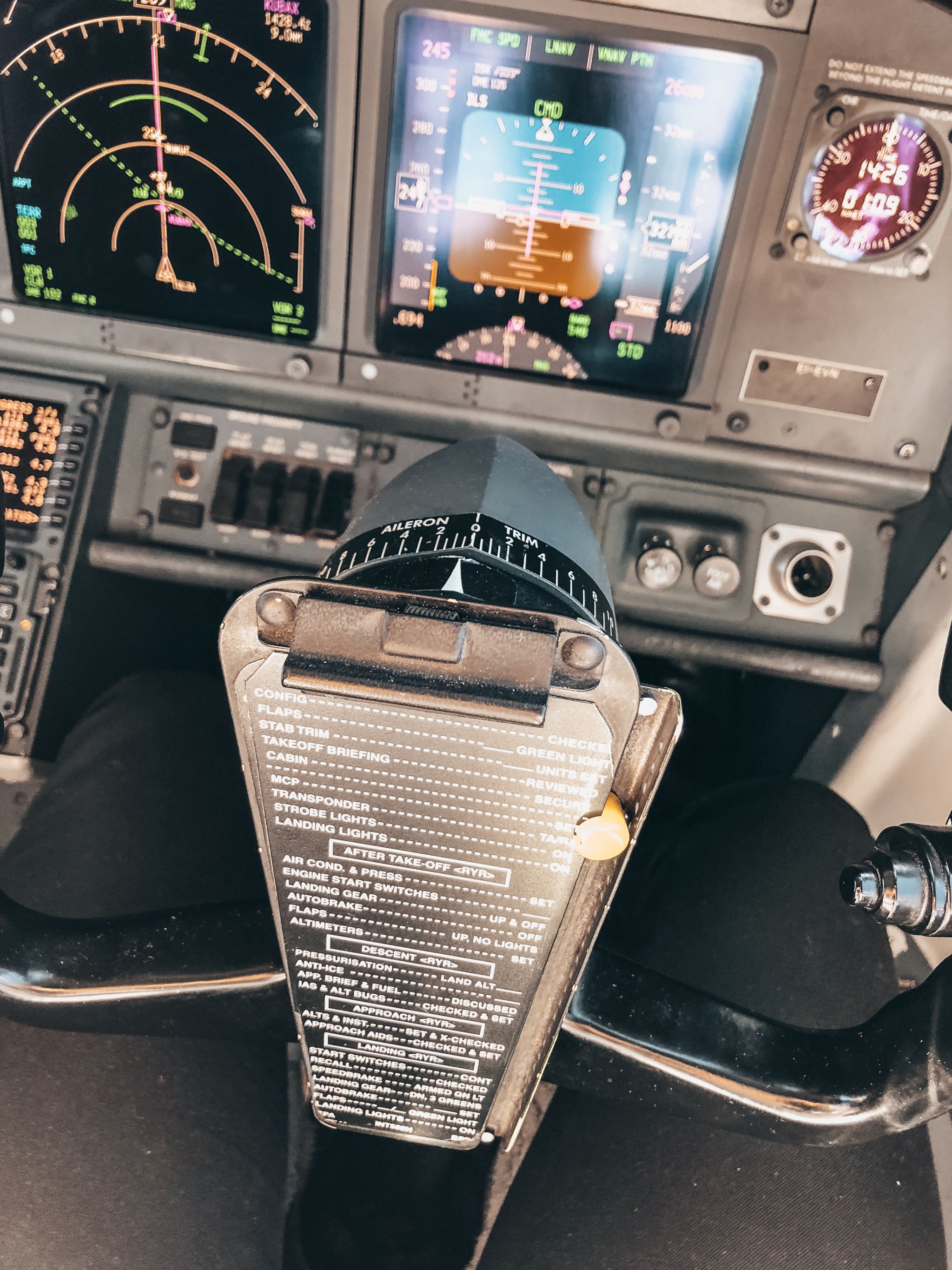 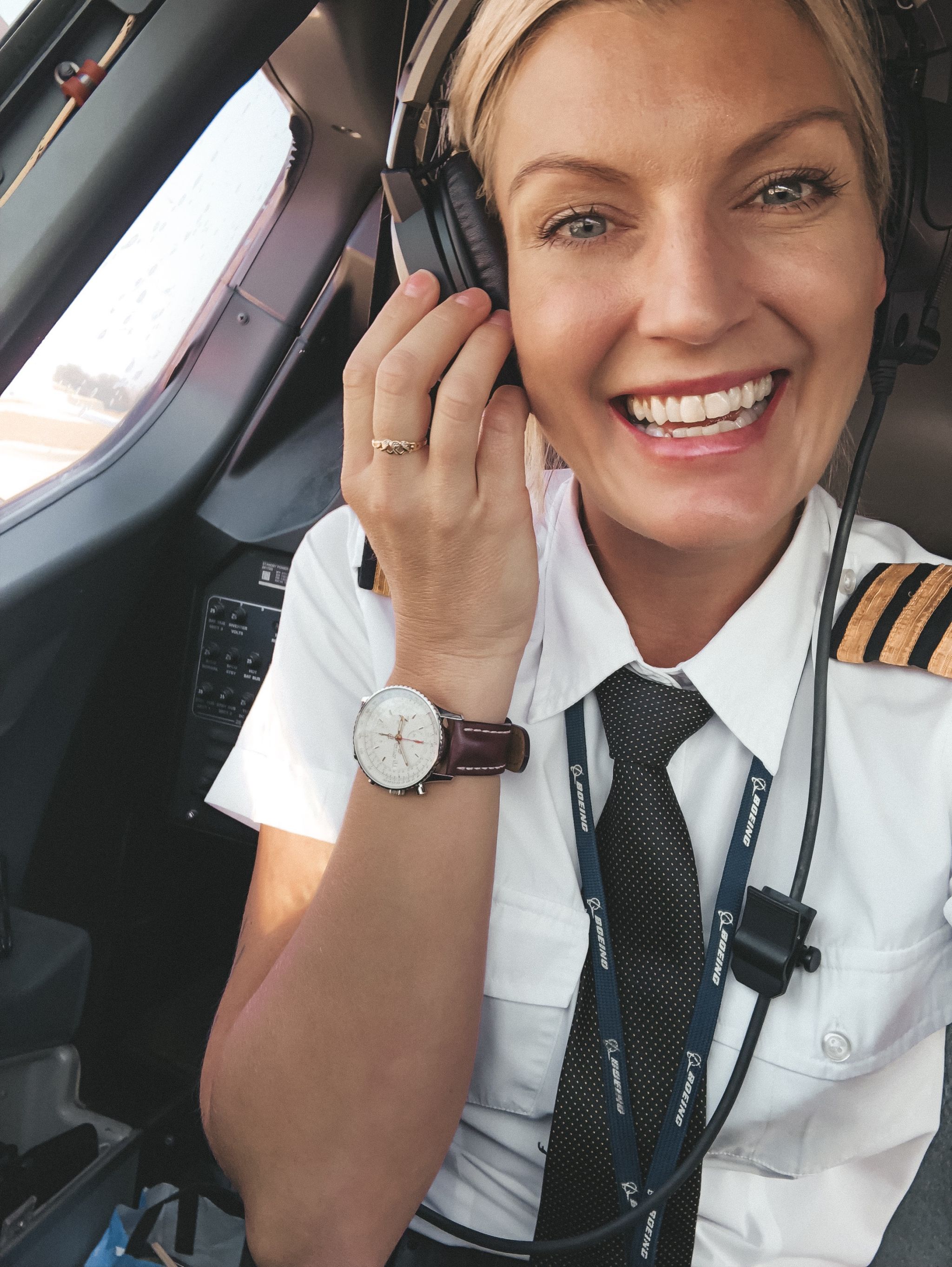 Day 4: We flew to Turin in Italy and was at 16,000 feet and on the downwind parallel to the runway (usually we are at 6000 feet this position) We kept high speed of 320 knots until Flight Level 100 where we set a vertical speed of 200 feet per minute to slow down to 220 knots, at 220 knots changed mode to Level Change (might work different on different aircraft types, I can only speak for the Boeing 737) Level Change will descend us at the selected MCP speed with thrust at idle and adjust the pitch for speed, pitch down to increase and up to decrease speed. With flaps 5 and speed breaks we got our profile back and was given the final vector at twelve miles. Turin is that kind of airport that if you’re coming from the North it means that you’re crossing the Alps and we can´t decent before we are on the South side of the mountains. The standard ´STAR´Standard Terminal Arrival Route would take us over the field and outbound to get back on the profile but in Italy, compliments, they are really good at giving vectors to a final so we seldom have to fly the full arrival routing. We would of course never begin an approach unless we were ready for it and if we would come in ´hot and high´ meaning to fast and high on the profile they would just give us extra vectors to get back on the profile.

I was the pilot flying to Turin meaning that the Captain would be pilot flying on the next two legs and me again on the fourth sector. He flew us back to Stansted and after that to Sandefjord, Torp in Norway, the forecasted weather showed that it would be somewhat windy weather in Norway today, we arrived there and couldn’t feel a hint of it, at 2000 feet we had 45 knots in the nose but it was steady, not gusty at all  and I told the Captain ´I can´t believe it´s 45 knots and this smooth´ a sentence you should never say, milliseconds after that the gust hit us, and we were tossed around like a leaf, but like everything else, gusty weather is something we are well trained for, even though, I was still impressed by how smooth he landed that airplane. 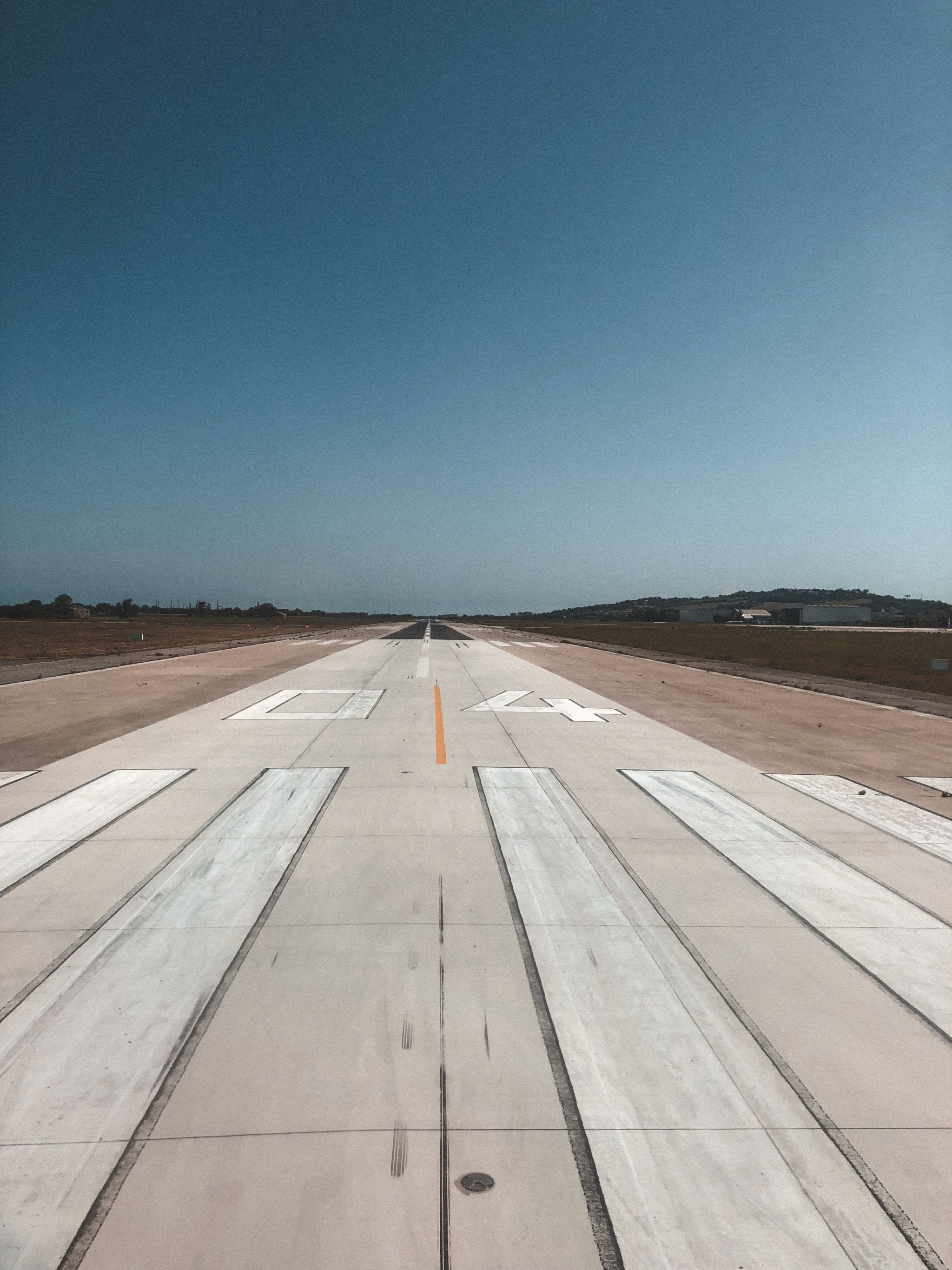 Day 5: I was supposed to fly Stansted to Marseille, Brest, Marseille and back to Stansted but was changed to instead fly Ancona in Italy and  Bergerac in France, a much longer day with an hour earlier check-in time so I had to skip my morning coffee and rush to the airport in order to not delay anything. I didn´t really mind, I love flying to Ancona, it´s such a friendly little airport with grass sticking up through the asphalt on the apron and a beautiful approach over the water. The Captain flew to Ancona so it was my sector to fly to Bergerac, the runway in Bergerac is short and they recommend a flaps 40 landing, no floating, it´s not the kind of airport to impress with smooth landing floating halfway down the runway. We calculate all our landing distances with current weight and latest weather conditions from the ATIS before we begin the approach. This airport has an ILS on one runway and GPS landing on the other, forecasted weather favoured the ILS and that was what we briefed for, receiving the latest weather reported Runway 09 was in use, the GPS approach, we did our calculations and with current weight we could still land the ILS so instead of resetting everything and brief for the other runway we asked to land with  5 knots tailwind on runway 27.

After day five, after landing an hour late, I took the shuttle bus back to the hotel I stayed at, I had already checked out earlier that morning but left my  suitcase in storage, I took the same shuttle back to the airport and arrived just in time to catch the National Express service bus 737 (ha 737 😉 ) to Luton Airport, checked in to Premier Inn Express where I stayed for about four hours before my alarm woke me up to get the early Wizz Air flight 4497 to Reykjavik, but that’s a different adventure and more from Iceland is coming soon! It was a dream, stay tuned.

Thank you for reading, and as always, if you have any questions, leave them below, comment on my Instagram @pilotmaria or send me an email, pilotmaria@hotmail.com  xx

ATIS: Automatic Terminal Information Service, updating the latest weather every half an hour, generally every 20 and 50 past the hour.

ILS: Instrument Landing System, an instrument approach that guides us both vertical and lateral to minimums.