On my Instagram page @pilotmaria I often get the question; “What can I do to become an airline pilot”  I wish I could answer each and everyone personally, but unfortunately, even how much I wish I could I don´t have enough time working a full-time job as an airline pilot, so I wrote this blog post and hope it can help as many of you as possible. 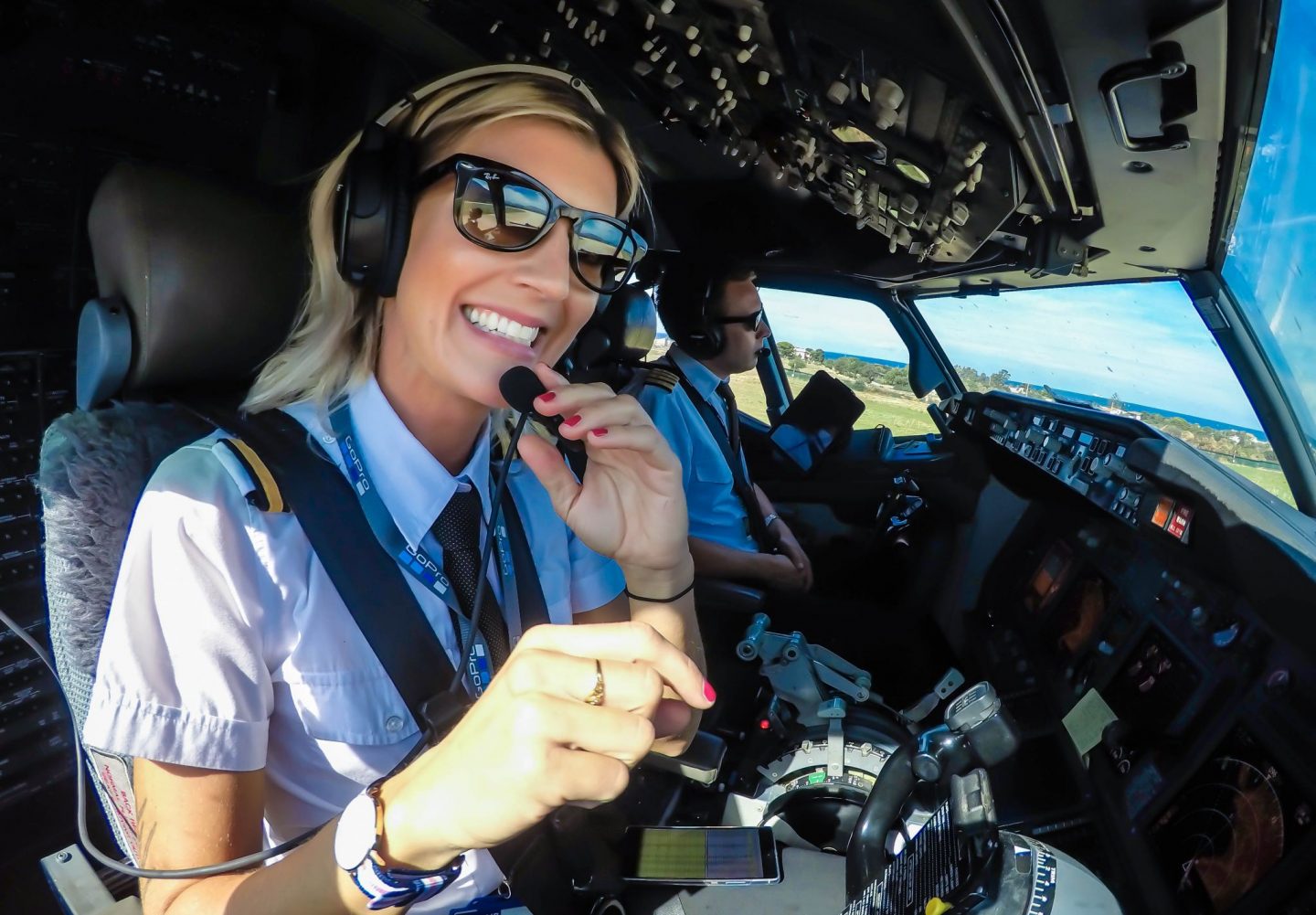 I started my pilot career in 2010, in Gothenburg, Sweden. It was intense and I had no idea what I had given myself into. I did my PPL (Private Pilot License) in just ten weeks! It was a full-time job. When I finished my PPL, I started the ATPL (Airline Transport Pilot License) theory the very next day. The ATPL theory took me from August to April 2011, and in the meantime I flew as much as I could to get my 100 hours PIC towards my CPL (Commercial Pilot License) Every day after school I took a thirty minutes power nap to recharge my batteries, in order to focus, I studied until at least ten at night when I went to bed. I usually go up an hour earlier than necessary to repeat what I studied the day before if there was anything that I in particular struggled with.

I had neither Instagram nor a smartphone back then. I could focus 100 percent on the subject (today when I need to focus I leave my phone in flight mode). Every Monday we had a progress test, to make sure that everyone was up to standard and knew what we needed to know. I studied every weekend! My alarm rang at 07:00 am every Saturday and Sunday morning. I made my own schedule that I followed strictly; morning stretch, breakfast, studying, lunch, study, dinner, study, and sleep. I had “memory cards” with questions on one side and the correct answer on the other side. I didn’t allow myself to go to bed before I knew them all. But not only the correct answers, I had to be comfortable and understand why the correct answer was what it was (anyone can memorize questions, but that is not how you learn, you will forget it just as fast). I wanted to understand, not just learn it for the exams.

In the beginning, during the PPL, I felt completely lost! Was I the only one who actually thought this was difficult and actually demanding? It was not before the ATPL theory that all the puzzle pieces fell into place when we dug deeper into each subject and I learned everything in greater depth.  As I took my last ATPL exam I could not have been happier with my results!

I did a so-called modular course, which means I started with my PPL, ATPL theory followed by ME (Multi Engine) IR (Instrument Rating) CPL and last MCC (Multi Crew Coordination) or in another order, this is just how I did it. With modular you can decide for yourself how, and how fast you want to be done.

The MCC course is according to me the most important course throughout the training, it teaches us how to work together as a team and take advantage of each others strength and knowledge, two brains are stronger than one! 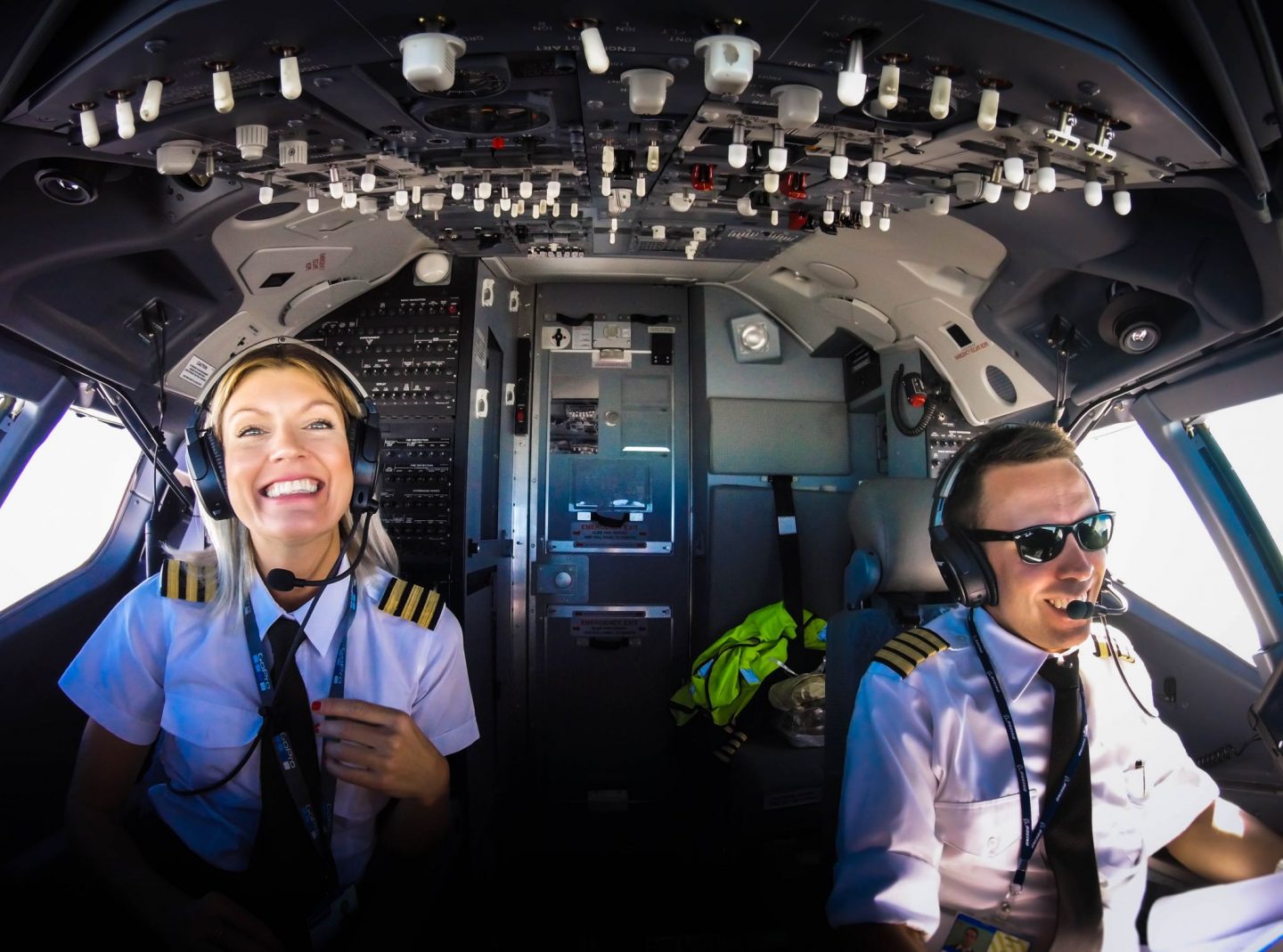 Summer of 2011 a couple of friends and I from flight school rented a Diamond 20 and a Cessna 172 and flew a VFR (Visual Flight Rules) navigation flight from Gothenburg, Sweden all the way to Almeria in the south of Spain. It was a great experience learning how to speak on the radio in busy European airspace. 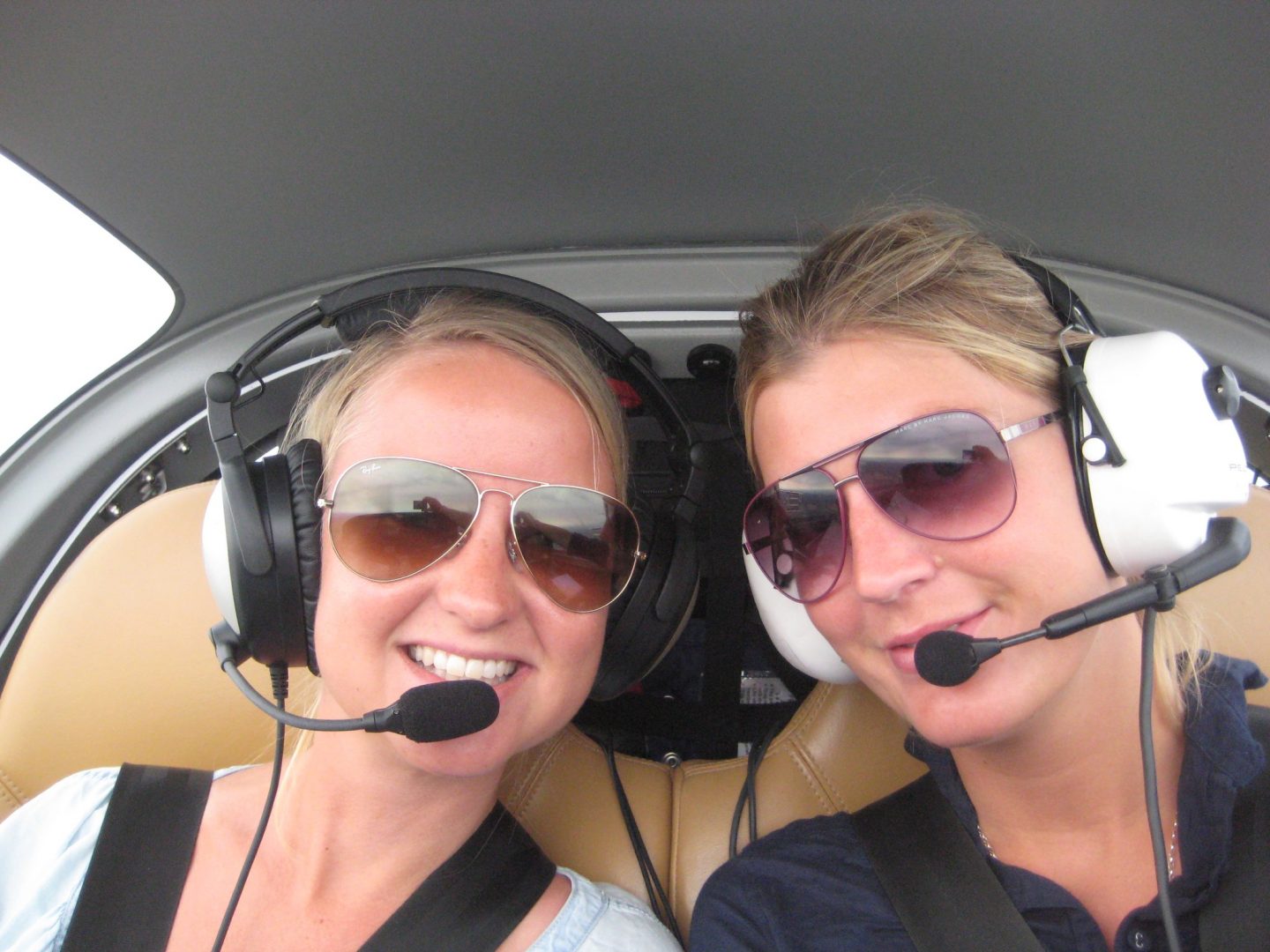 Annie and I did most of our training together, when she flew I sat in the back and vice versa, in this way we got to see everything twice and I feel it was the best way to learn more. We flew our ME, IR and CPL together in a Gulfstream! It felt really cool to sign GA time! But in fact not Jet as most would associate a Gulfstream with, but a two engineered piston propeller engine airplane “The Cougar” built in 1978 with all the traditional clocks, NDB needles – back to basics!

In December 2011 I had completed all my certificates and could call myself a proud commercial pilot! I was ready to take the pilot world by storm and applied to what felt like every airline in the world.

I checked my mail several times every day to see all airlines that would call me for an interview, but echo! Absolutely nothing! Most of the time there was no reply back at all, and sometimes there was an automatic reply sent back, started with something like “Dear MR” !! All applications and they did not even care about if it was a woman or man who applied, and sent the same reply to everyone, which stereotyped it to MR!

I felt like giving up, frustrated because I did not even get the chance to show what I could do on an interview and it was expensive to keep all my licenses to date. Every year you have to do a check ride to keep them valid, meaning that you need to rent an airplane with an examiner.

It was not until January 2014 when it suddenly happened. I received an email that the company I fly for today was interested in receiving my application and called me for an interview!

We first had a telephone interview, I could hardly control my voice, uncontrollable with nerves, the woman I talked to was really nice and she seemed to have the full understanding of me being nervous.

After successfully passing the telephone interview I had my simulator check at London, Stansted airport followed with a technical and personal interview.

As preparation, I repeated my ATPL knowledge from school, read one of the best pilot interview preparation books Ace Technical Pilot Interview  I flew flight simulator on my computer at home, repeating approach procedures ILS after ILS, VOR, NDB, holdings everything! I was even lucky enough to be given two hours in a real Boeing 737-800 simulator practicing the scenarios that might happen during the simulator check with a Captain from the same company, thank you @piloth_tv

The day of my interview I felt prepared but nervous. My voice was uncontrollable, my face turned red and my legs started to shake, how am I suppose to be able to demonstrate level flight with a leg that bounces up and down like severe turbulence.  I rarely get nervous, I don’t see a reason for it but this time it was like everything was at stake. I wanted this so badly. I had been working so hard for it and I knew I would probably not be given a second chance. 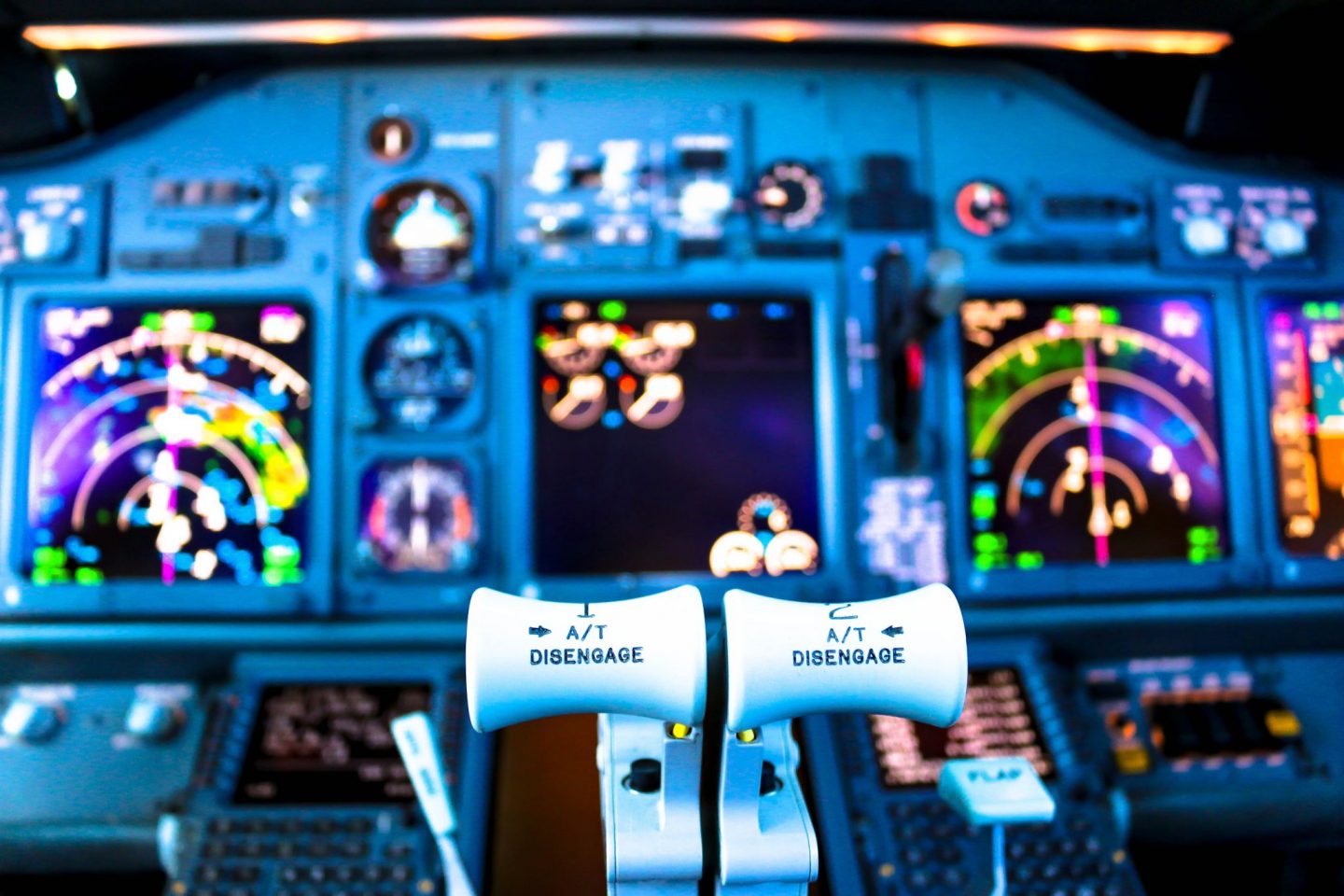 After a full day at the sim center, back at the hotel, the first thing I did was to lay down in my bed starting to cry, I thought I blew it. I thought I did not have a chance and I was waiting for the email saying that I didn’t pass. After three weeks I thought they forgot about me. I kept in contact with the other pilots who had been on the same assessment day as I and they as well heard nothing. Maybe it was a good sign? I would never allow myself to think that I might have passed. If I get my hopes up I would only get disappointed. Five and a half weeks later my phone rang, someone from aviation something….adrenaline was pumping through my body and I could not make out what he was saying, rang and said that I successfully had passed the interview and was welcome to start the 737 Type Rating course “CAE1420” at CAE Amsterdam. I could not believe it. Really! Me? Was I going to be an airline pilot!

Five weeks later a group of twelve met in East Midlands for the first time, starting our training together. After one week in East Midlands, containing safety training and tests we started the type rating at CAE Amsterdam sim center. The type rating took approximately six weeks, six weeks of hard training and not enjoyable at all. Thinking back on that time I wish I would have enjoyed it more. But for me, it was so intense and I was so focused on doing well that I did not take time to breathe nor enjoy the fun of it, flying is fun and so should the training be.

After the type rating was base training. We were a group of five during my base training, base training is when you do touch and go in a 737, basically, we had a whole 737 to do traffic circuits with. No passengers, no crew, only us and the training Captain. I have never felt as powerful as I did advancing the thrust levers for taking off that first time!

It was amazing, five takeoffs and landings each, it went so fast I forgot to enjoy it, again…. I was too focused on doing well and forgot to be in the moment.

After the base training in East Midlands, I started my Line Training in Stockholm, Skavsta. Line training is when you learn the company’s procedures and SOP (Standard Operating Procedures). It takes around 80 sectors, approximately two months. I had a great time in Skavsta, flew with great Line Training Captains. I was happy to do my training in the northern parts of Europe with winter operations, foggy approaches giving me great experience. 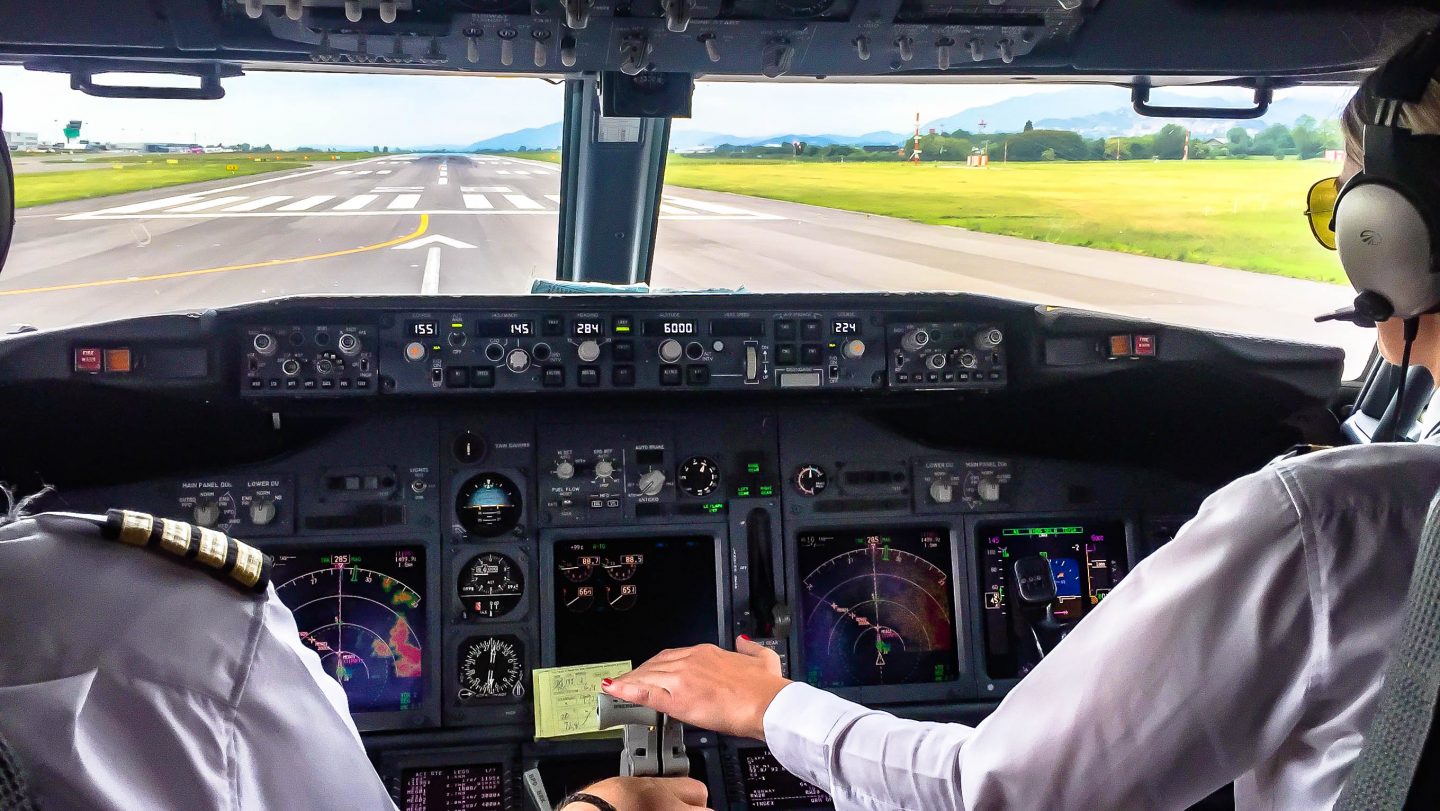 This was my journey, if you yourself is an aspiring pilot and wonder how you can get into the training or where to start. Here is a quick guidance on some tips and tricks to become a pilot.

Flight training is expensive be sure that this is what you want to do! Find a flight club close to where you live, most airfields normally have a small aero club with a couple of Cessnas or Pipers. Contact them and see if they can take you on a thirty minutes flight. It might cost you 100 euros, but you will know if you love it, fall in love with aviation, “For once you have tasted flight you will walk the earth with your eyes turned skywards, for there you have been and there you will long to return”  You can do your training either integrated or modular. Integrated means that you do all courses (PPL, CPL, ME, IR, MCC) integrated at once. Modular means that you do them step by step.  Go on recruitment days ask questions, what they offer etc. Learn as much as you can about the school. Ask the students that are already attending the school. They can give you insight that nobody else can. Save money, get a bank loan or however you decide to finance your training. It is expensive and can cost anything from Euro 50k to 120k! It’s worth to check out different schools and compare prices. Put your heart and soul into the training, it is not easy and it will be demanding!  When you are done, apply for jobs, this is the hardest part. For me it took almost two years. Two years of not even getting an interview, but you will get there, you will get that interview and you will get that job so keep fighting.
Enjoy it for the rest of your career!